Congrats to Cendrine for releasing her newest photography book, Life's Little Things: The Quotes! The book came out on July 25th. Readers and photography lovers, stop by her Amazon page to see her other books on social media and blogging. She's got some great ideas there.
Read more »
Posted by Deanna Jewel at 3:00 AM No comments: 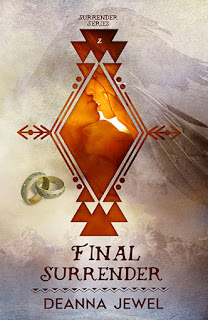 I am having so much fun with the sequel to Never Surrender and many of you have been waiting way too long for me to finish this. I'm at 75,000 and have made major progress in the last month.

Read more »
Posted by Deanna Jewel at 1:46 PM No comments:

Please help me welcome Cindy, who lives in Australia, as she tells us a bit about herself and what she writes. Cindy, thank you for being my guest this week!

Deanna:  For an evening out, would it be dinner or a movie? What would the dinner be? What might the movie be?

Cindy:  I really enjoy the novelty of eating Moroccan food, with the sampling of lots of small portions, and plenty of bread and dips. It is a great way to relax with a small party of friends. I’d love to follow it up with an action movie, but I usually eat too much and get too sleepy!

Deanna:  Do you prefer wine, whiskey, scotch, or ice tea?

Cindy:  Rum, particularly Captain Morgan spiced rum! Reminds me of Johnny Depp, and that’s no bad thing! I tried iced tea when I was in the USA and I really enjoyed it, but it’s not very popular in Australia.

Deanna:  Johnny Depp is one of my favorites, too! What do you do to relax when you aren’t writing?

Cindy:  I like to get out in the garden, and have a passion for propagating new plants from cuttings. The garden I see as a haven for insects and birds, and I try to grow mostly Australian native plants, although I do love fresh herbs for cooking. I also enjoy cooking, with baking being my main interest – all from my collection of old cookbooks.

Deanna:  What one thing would you pass on to new writers?

Cindy:  The main thing is to just write! I think you learn by writing – a lot- and no amount of reading about how others write will help you find your own voice. Then find some local writers groups or on Facebook, and join in. Then start working on things to submit, short stories, poems, flash fiction or novels – there are markets for all of these.

Deanna:  Do your books have a common theme or are they all different?

Cindy:  I write in several different genres, so while the current book is time travel romance, I have others on the hard drive that are science fiction, paranormal fantasy, urban fantasy and sword and sorcery. The common theme to all of them is action and adventure, and a fast pace.

Deanna:  Tell us about your latest book and the type of reader it may appeal to. I love the cover, by the way!

Cindy:  Druid’s Portal takes the reader into the past – some 2,000 years ago to the time of Roman Britain and the area of Hadrian’s Wall. It was a time of war, as two opposing cultures clashed. Into this drops Janet, a modern day archaeologist, and we follow her adventures with Roman soldier Trajan as they face barbaric Celts, ancient goddesses, druids and her violent ex-fiancé who has vowed to destroy the Roman Empire.
It appeals firstly to readers of historical fantasy and time travel books, but due to the fast pace and fantasy elements, many readers that don’t read romances have labeled it a page turner and enjoyed it.

Deanna:  What five fictional characters would you invite to a party?

Cindy:  Let’s see – could be an exciting party. Conan (RE Howard), Nanny Ogg, (Terry Pratchett), Gimli (JRR Tolkien), Hermione Granger (JK Rowling) and Tarzan (ER Burroughs). Perhaps we would have to leave weapons at the door.

Deanna:  What book has had the greatest influence on you?

Cindy:  I read Robert Heinlein’s ‘Have Space Suit, Will Travel’ as a teenager and it stuck with me. The theme of being ready for the unexpected adventure from the knowledge in your head led me to a lot of extra research and study I would never have learned in school.

Deanna:  What are you working on now?

Cindy:  I am researching for the second in the Druid’s Portal series. There has been such an explosion of information and archaeological details available on the internet that I can add in as details to make the reader feel like they are back in the past. I just have to make sure I do some writing rather than getting too fascinated by history.

Deanna:  What’s been the most bizarre thing you have researched?

Cindy:  I found out Romans had a thing for eating snails, they even imported their preferred type to Britain. They often had small snail farms in their back yards, where they would fatten them up for eating, before cooking them in wine, fish sauce, and herbs.
Thank you for having me, Deanna. Readers, I look forward to reading your comments for the contest below, so please join in.


WHERE TO FIND ME

CONTEST:  One commenter will be chosen on Friday. Cindy will offer a gift piece of flash fiction, inspired by three random words provided by a person in the comments. Be sure to leave a comment below and leave three words for Cindy. She will pick a winner on Friday and write your story for you. Good luck and have fun!

Thank you for stopping by
to meet Cindy!

Posted by Deanna Jewel at 6:00 PM No comments:

Please help me welcome a dear friend who writes great stories and continues to enjoy life to the fullest. I met Charmaine several years ago online and we've been great friends ever since. We talk on the phone and share writing ideas. I get such a kick out of hearing from her. I know you'll enjoy her stories!
Read more »
Posted by Deanna Jewel at 8:14 PM No comments: